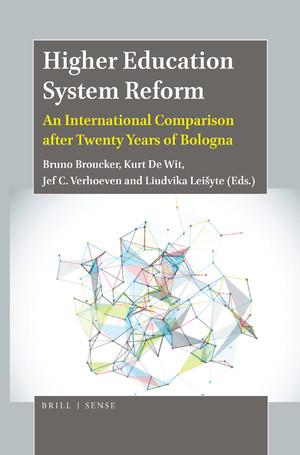 The Bologna Declaration started the development of the European Higher Education Area. The ensuing Bologna Process has run for already 20 years now. In the meantime many higher education systems in Europe have been reformed – some more drastically than others; some quicker than others; some with more resistance than others. In the process of reform the initial (six) goals have sometimes been forgotten or sometimes been taken a step further. The context too has shifted: while the European Union in itself has expanded, the voice for exit has also been heard more frequently.

Higher Education System Reform: An international comparison after Twenty Years of Bologna critically describes and analyses 12 Higher Education Systems from the perspective of four major questions: What is currently the situation with regard to the six original goals of Bologna? What was the adopted path of reform? Which were the triggering (economic, social, political) factors for the reform in each specific country? What was the rationale/discourse used during the reform?
The book comparatively analyses the different systems, their paths of reforms and trajectories, and the similarities and the differences between them. At the same time it critically assesses the current situation on higher education in Europe, and hints towards a future policy agenda.